I’ve been rogaining since 2004 (ironically, my first event was set by Mark and Ella as well) and have never been fortunate enough to come 1st overall. My desire to improve has pushed me into running, both trail and road running. Many years later I’ve now run three Yurebilla Ultra-Marathons, two road marathons and managed 185km at the Yumigo 24hr event in 2014.

With this in mind, it was time to build a 6 hr team that could do some damage at Kuitpo.

My partners of choice:

We came together in the rain and mud at Kuitpo Forest on a dismal Sunday morning. With maps in hand we sat together in the ‘comfort’ of my Corolla to formulate a plan. It was immediately obvious it was going to be very difficult to clean it up. With the challenge of making the four corners of the map, we finally agreed upon a 56km plan (with some time-based short cuts and tipping points). It was decided to head south in the early parts to get through the hilly sections in Kyeema Conservation Park while we were fresh. We stuck to this plan until the final 30 minutes. 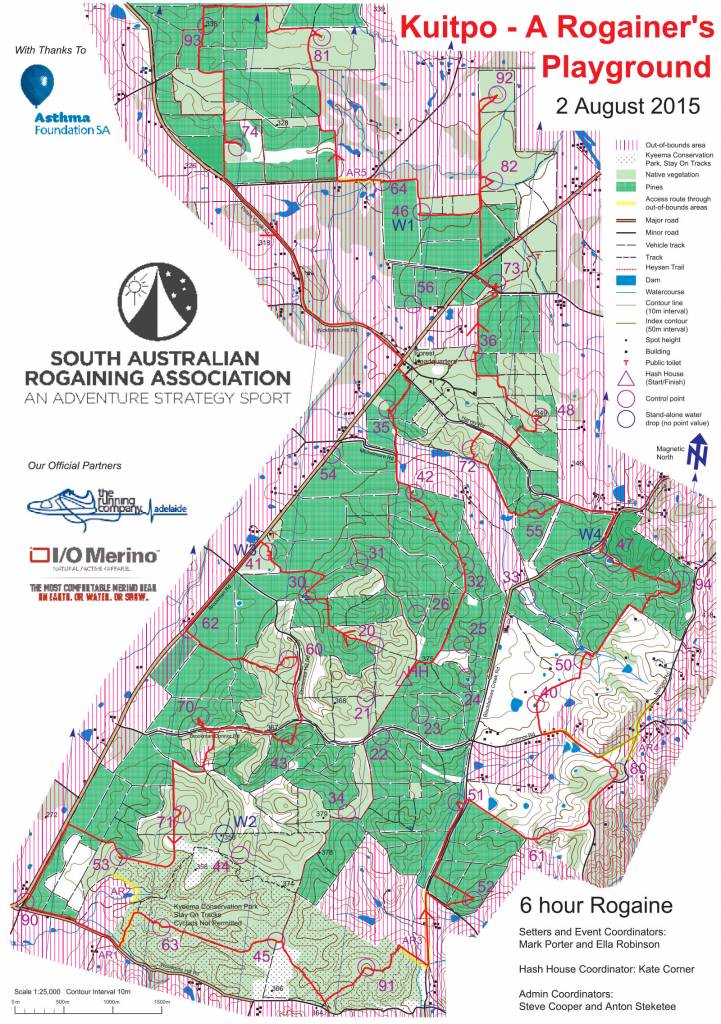 Heading east to Kyeema we nabbed 63, 45 and 91. This covered a short burst on a section of the Heysen Trail which I plan to be running as part of Heysen105 in October (my maiden 100km ultra). Along this section of the trail I managed to roll my ankle; not a major issue at the time but proved to be a factor later. As we circumnavigated the map, we turned north to 52, 51 and 61. Followed the spur up to the road to 80, then further along to 40 and 50, spending some time trying to find a decent spot to cross the creek to get to the track. At this point we were travelling pretty well and on target to make our plan.

Our third 90 point control was close, so we headed to 94 and onwards to 47 with a quick stop to refill water bottles. Along the road to and into the forest for 55 then north-west to 72. Somewhere in this area, we crossed paths with the second place team, Dion Byas and Sarah Murphy.

Continuing with our plan, we headed northwards to 48, 36 and 73. With 92 and 82 on the agenda, we decided to drop our packs at the track junction, ran through the nearby watercourse and did a rapid ‘out-n-back’ to pick up the 170 points. At this point we had a quick team meeting, chaired by Pieter. With 1:45 to go, it was either hit 46 and 64 then turn and head towards the HH and clean-up the residual controls along the way OR start heading to the NW corner and collect the 240 points and collect as much as we can on the way back to HH. With the value of controls near the HH being relatively small, and our current location being sufficient to do the job, we decided to go for the points. The only issue was my ankle, which I had rolled earlier, was starting to get rather sore. We crossed paths with another strong team in Andrew Kennedy and Zara Soden on our way to 64 and informed them of our plan.

From 64, we held the tracks north to 81 then bagged 93 (that’s all the 90s done and hit the marathon distance). It was time to start making tracks for the HH with some minor changes to our original plan due to time – south to 74 then a very long stretch on Peters Creek Rd. At this point we had just over 8km and a number of controls to do in 48 minutes. We sat on a steady 5 minute pace for this stretch, but the hard road was doing my ankle no favours. Grit your teeth, Randell!!

Back to the Heysen Trail and south to 35, 42 and 32. With time becoming critical we headed straight for the HH. We rounded the corner and spotted the HH tent, ambled over the finish line with 1min 30 to go.

The end result was 2050 points and 51.5km for the day. Totally stoked to get my first overall win, and a great hit-out for my legs coming into the Adelaide Marathon.