Ali and I are orienteers from SA and NSW respectively b 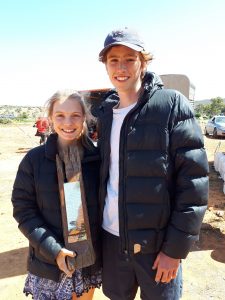 ut we both live in Sydney normally. We were initially meant to be in Adelaide for a week but due to covid that’s become 3 months, so when we saw the 24 hour rogaine was taking place we took the opportunity to try something new.

Our main goal was to stay up all night. We’d decided we would be happy to give up at sunrise if we were over it.

The first 7 hours were really good, we were on a roll and full of energy. We covered almost half our total distance but after stopping for dinner at the hash house we lost a bit of steam. We’d agreed on walking through the night with a few gentle shuffles, but walking quickly turned into plodding and we struggled to keep up our momentum from the day. It was interesting trying out caffeine gels which certainly lifted our spirits for an hour or so, but then we felt the crash even worse when we felt ill for the rest of the event.

Come the morning, we gave running another red hot crack next to and along the ridge. We got off the ridge with about 3 hours left and had plans for a final running push along the flat, but unfortunately the rocky slopes of the ridge seemed make our bodies say no. On the flat, I broke out in itchy hives which resulted in Ali swapping his shorts for my tights. We imagine this would’ve been an interesting scene for someone to come across. We decided to pull the pin and head home shortly after where we hobbled our way to the finish.

The coolest moment for us was when we got up to one of the 90 pointers on top of this big rocky hill and sat down to eat some cold ravioli at about 2am. Below we could see the lights from a town in the far distance, and we felt truly isolated (and a little lonely). Most of the night was spent holding hands, which for Ali was hard work, though I was certainly grateful to kept on my feet.

Coming from an orienteering background, the scale was different and it took a few controls for us to get used to the lack of detail and think bigger in terms of what would be mapped. During the day we didn’t have any navigation issues, but as it got dark and we got more tired we had a couple of minor hiccups. Our biggest mistake was overshooting a control on a track by a kilometre.

It’s a surprisingly addictive sport and we’re definitely looking forward to trying one again soon. Thank you to the organisers and volunteers who make these events possible; it has been a true highlight of our year. The rogaining community are so wonderful, we spoke to lots of people and felt very welcome.