They are part of life; sometimes the number of decisions we need to make can be paralyzing. Some decisions we make are great; some awful (I’ll bet you had a particularly bad one spring to mind with that statement!)

Rogaining is a sport based on strategy, decision making, navigation and stamina. It’s a sport where average participants can compete well against naturally gifted athletes. Of course, if you can run fast and long AND make great decisions when navigating, you are probably going to do very well.

My rogaining partner and sister, Jo, and I competed in the recent Australasian Rogaining Championships in the Gympie region, SE Queensland. I was quite nervous prior to going because I was very aware that I had not been doing any decent training, while Jo had been away hiking long distances every weekend for the previous six weeks. She had great potential to make me hurt… a lot. (Yes, lack of training had been a poor decision on my part.)

We joined rogainers from other states and New Zealand and caught the bus to the hash house site in Manumbar. (The hash house is not someone’s house where we sit around smoking pot but is the location of the start/finish and camping area for a rogaine.) There was an amusing moment when all 50 of us poured off the bus into a little supermarket in a small country town to buy a large array of high-calorie, high-carb, light-weight food. What food to carry while rogaining is a very important decision. Regular food intake is vital to provide sustained energy while competing for 24 hours.

Once at the hash house we set up our campsites, registered and had a large carb-laden dinner where we caught up with previously met interstaters, then off to bed for a good night’s sleep.

Dawn of competition day brought the start of some crucial decision making; what will be carried on course? Rain gear – jacket? Rain pants too? Food – what and how much? How many layers of clothing for overnight? At least our basic rogaining clothing didn’t need thinking about too much. Jo and I have a team kit consisting of ioMerino t-shirt, jacket and socks plus Fox MTB shorts (which are really tough over barbwire and have loads of pockets). At map collection time of 0900 hours we were dressed and organised, with our rogaining pack ready to go.

Once the maps were handed out the serious competition started. Teams found quiet spaces around the hash house site and proceeded to assess multiple routes on the map. The 1:40,000 map was huge (63cm by 72cm) and it was challenging to work out our best day and night route, optimizing distance and points, and factoring in the all-night café for dinner- a decision that meant we could carry just a little less food out on course.

Midday came around far too quickly, with a last-minute toilet-stop, a quick application of sunscreen, the setter’s briefing, the countdown to 12 noon and then we were off. The land was predominantly cattle country with lots of rolling hills, long dry grass with rough, uneven ground but often open with good views. Cattle fences are very different to the sheep fences we’re accustomed to. They were tightly strung with four strands of barbed wire so no going over or even through. Our ‘throw the pack over and roll under’ technique improved markedly over the 24 hours.

After easily picking up the first couple of controls we settled into a nice rhythm. The sun was shining and it was pretty warm. We were product testing ioMerino caps and were impressed with their coolness in the heat. They out-performed any hat I’ve ever worn. This is a new piece of kit I’ve since bought. Jo doesn’t normally wear caps, preferring a wider brim hat, but she’s now completely sold on them too. (I think it’s because she has a larger head, so caps are not so flattering but these are a bit bigger – you judge from the pics.)

We walked steadily through the day, choosing to go around some hills rather than up, over them, so I could conserve energy and arrive at the all-night café at 7.30pm for dinner. This was an outstanding setup! We made the decision to spend no longer than 30 mins there and we thoroughly enjoyed having hot soup and dinner, with cake and a cup of coffee to finish. I was a bit anxious about the upcoming night navigation because we hadn’t managed to plan a ‘safe’ night route with close ‘handrails’ and the memory of our poor night navigation, four weeks earlier at our State Champs, played silly buggers with my mind.

My strength is in shapes, matching contours to the ground, and Jo is very definitely better at bearings. This rogaine we chose to do something different to previous rogaines. Jo followed the bearing and pace counting, calling out each 100m interval so I could hold them to memory too, while I focused on keeping the map to the ground in the dark. This worked fabulously and improved our accuracy, efficiency and confidence. It was very satisfying! Our navigation was still not flawless, but our mistakes were recoverable and not as time-consuming as in other rogaines.

This rogaine was called ‘The SunSEQer’, a clever play on words. The region hadn’t seen rain for 122 consecutive days, but around midnight the drizzle started, and by morning we were definitely seeking the sun. Initially, the rain wasn’t too much and breaking out the jackets was enough, but it was persistent. Jo had sensibly packed her rain pants. I, on the other hand, became completely soaked from the waist down (this was one of my poor choices). The ioMerino caps were amazing. The peak kept the rain off and the damp wool still kept our heads warm. (Just in case you haven’t worked it out, I have so much love for this hat; I’ve known and used merino clothing a long time but never a wool cap!)

Our initial plan was to come through the hash house at dawn to maybe have an hour’s sleep and go out again. Well, we arrived at dawn but were so wet at this point there was no way we would be able to lay down, sleep for an hour, get our wet gear back on and go out again. The temptation to just get into our sleeping bags and not venture back into the rain would have been too great. Instead, I wisely chose to put on my ioMerino leggings with rain pants over the top. We ate a quick, but very welcome, breakfast and went straight out again. I’ve forgotten to say that during the night I had taken a decent fall when stepping into a hole and had sustained some deep scratches in my leg. The change of clothes felt so nice and soft on the injury – even now it still looks like a tiger mauled me.

We continued picking our way through our planned route steadily; tired but doing ok, choosing to drop a 30-point control close to the finish because we were too tired to hurry and it was going to be a bit tight for time. Finishing with 20 mins to spare, we were satisfied with our efforts and score. After packing up our very wet tent and gear, we kicked back and enjoyed eating our well-earned lunch while watching the presentations. The deserving winners in each category received beautiful, hand-made wood trophies and mugs. We were completely gobsmacked when our names were called out as coming 3rdin the veteran women’s category! In the Australasian Champs!! Unbelievable!!! We proudly received our mugs on the podium.

The SunSEQer rogaine was a fabulous event and we thoroughly enjoyed it, even though it was the wettest we’ve ever been in a rogaine. My feet are still peeling! We made some great decisions and the odd poor one, but my mug reminds me that you’ve got to be in it to win it. Competing was a very good choice. 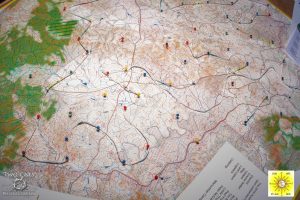 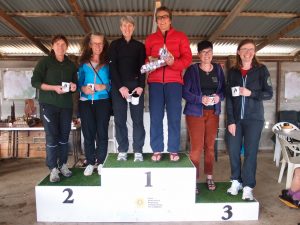