We arrived at the Hash House just before 9.00 am for our map planning. Our plan was to maximise points with a straight line (string) distance of around 20km. Final route we decided on was about 22Km (straight line), with options towards the end to miss out points if we were running late. 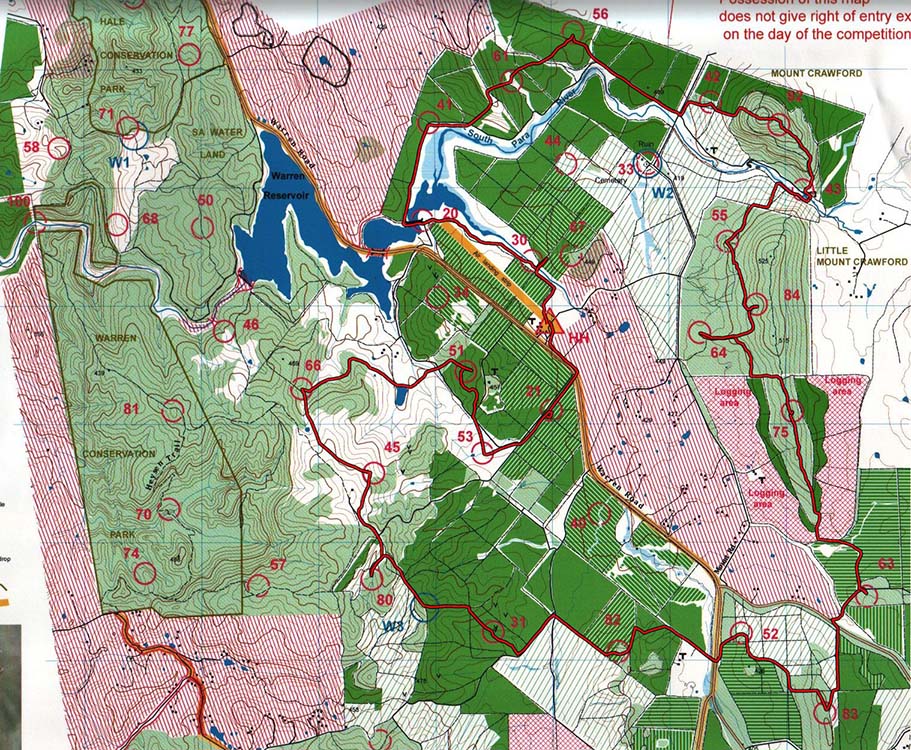 We set off south down the road, there was only one other team going this way with us. First couple of controls were straight forward. We wasted a little time looking for 51, which was missing and later found out stolen.

Lots of kangaroos in bush between 51 and 66. The approach into control 80 was a real bush bash with lots of fallen trees across the creek. An emu ran across our path on the way out of 80. Next few controls were straight forward. Lovely walk up the Heysen trail to 75. We decided to cut through the bush on the way to 64 as it looked fairly open, this saved us some time. Saw a Koala next to track on the way to 84, it was looking amused at all the Rogainer’s going past.

Didn’t find the track through the plantation on the way to 43 so had to cut through the trees. Took our shoes and socks off and paddled across the river at 43.

Hard climb up the track to 92, then a steep decent down the other side of Mt Crawford. We were still almost running on time so continued around the northern side of the South Para River to the bridge.

Our final controls were planned to be 30 then 67. We got to 30 and started heading for 67 but decided we may not have time to make it up the hill and back to the finish in time, so went straight to the finish