The 2018 Australian Rogaining Championships, or ‘Sun SEQer rogaine’, was held in the Gympie Region of Queensland. My rogaining partner and I were lucky enough to receive support from the Nigel Aylott Memorial Fund to cover our travel expenses to and from the event. We represented the University of Adelaide, and have participated in a few 24-hour events before, so knew what we were getting into. We are by no means a highly competitive team. However, even the Australian Championships is not an event only for the elites… every-day people can enter it as well and still have fun!

My rogaining partner and I had prepared for this event through the South Australian State Championship event held a few weeks earlier. We did not fare well in this event but were determined to try and have a better strategy this time around, that did not involve getting stranded on the high-plains during a thunderstorm at 1 am!

Map planning is one of my favourite elements of rogaining, possibly because there is no pain associated with it (only anticipated!). We were surprised by how big the map was… far bigger than the state championships, with grid lines being drawn every two kilometres. The controls were spaced further apart, averaging over 2km. After pinning the map out, we identified regions of high-value controls and started planning. Navigation did not look as tough as we had anticipated, with much of the terrain having prominent features, and tracks that could catch you. You would think three hours would be enough time to plan a route, but we still had not come to an agreement as to the best route to take when we realized we needed to start getting ready to leave.

After the final briefing, we were off! We maintained a fast walk over some fast country for the first few controls, finding them with no troubles. We had bought new compasses for this event that actually pointed in the right direction, making navigation a breeze. Due to this, and possibly also the slightly-easier-than-average-for-a-rogaine navigation, we did not make a single navigation error on the entire course and hit controls spot on and efficiently. Alas, our problems resided more in the physical department…

A large hill combined with some bush-bashing slowed our progress somewhat, but we ploughed on at a reasonable pace, hitting high-value controls in the South of the map. Something must be said for all the fences we had to cross throughout the event. We must have crossed 25 taut barbed wire fences. These were annoying as crossing over them is painful and awkward, and crossing under them involves taking packs off and rolling.

We arrived at our first water point at 9 pm, exactly on schedule, having collected just under 1000 points, which we thought was a reasonable effort. Our night navigation had been amazing. Here was our decision point. One plan involved heading to the ANC, collecting controls as we went, and then looping back around up North of the map throughout the morning. This was the ideal plan. But it was at this stage in the rogaine where we realized that maybe our goals and expectations for this rogaine were not very well aligned. We were torn between pushing hard all night and amassing points or going at a fast pace direct to the hash house to get some sleep and then go again in the morning. Unfortunately, (from a total point perspective), the latter option was chosen, and we made an arduous journey back the HH without collecting any worthwhile points. This was a low point for me, involving a few hours of road walking that became exhausting, and I was glad when the HH finally came into view.

After some delicious hot food just past midnight, we some sleep. When we were ready to move again, the sun was creeping over the horizon. Or would have been, if it wasn’t misty and rainy. Nevertheless, we continued through the fields of wet grass, doing a loop north of the HH. We timed it very close for comfort, even meeting a few teams doing the loop in the opposite direction who questioned if we knew the time! We ended up jogging into the HH with under a minute to spare, finally completing an event I had had my eyes set on for a while.

It is a great feeling completing a 24h event! The feeling would have been better if we had managed to stay out all night and collected more points, however, we still considered our performance a victory. We hiked a straight line distance of 65km, which probably equates to 80km on the ground. We moved at a fast pace when we were moving, and just need to work on our endurance in order to significantly improve our results. We were super happy we didn’t make any navigational blunders; this was one of our goals going in. I would definitely recommend any prospective rogainers to try some of the longer 24h events offered by the amazing team at SARA, and nationally. They are incredibly rewarding and a great experience. They are even fun! Despite some difficulties, we emerged at the end with a smile on our faces.

I should mention here the ioMerino gear that I used on course because it definitely made the rogaine much more comfortable. I own a pair of the Altitude Active Boxers and also the Multi-Sport Socks. I have used the boxers extensively in all my active pursuits, from running to rock climbing, and this rogaine was no exception. They could not be comfier, due to the very fine MicroMerino wool that is used. They also worked to prevent chafing, and have become my go to pair. I had not used the socks before, but took a risk by wearing them for the first time during the event, and had no regrets. They were comfortable and provided ample cushioning and allowed my feet to breathe well. I was sceptical of the ‘anti-blister’ technology that was claimed, however, I did not get any blisters for the first time during a rogaine, so I’ll let that speak for itself… 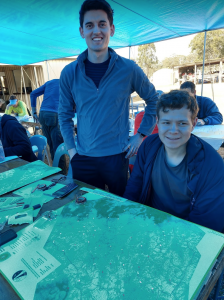