My ideal rogaine preparation involves a schedule of some months of regular and frequent running, hiking and generally replicating the physical stresses of a rogaine. In the lead up to the 2015 edition of the Spring 12 hour this didn’t happen. Obligations, temptations, frustrations, life and other inconveniences conspired against my grand preparation designs. Going into the last days before the event all I’d managed was a few short runs in the park. Ah well, I figured at least I wasn’t suffering any major illnesses or injuries: my sometimes troublesome knees weren’t bothering me, I was finally rid of an annoying plantar wart and apart from a mild chest cold I was, I thought, in okay health. The cold had lingered for a while and half threatened to become bronchial so I thought maybe a dose of antibiotics was in order. I booked an appointment with the GP.

A bit over a week out from the Roo-gaine, there I was describing my symptoms to the doctor, expecting a prescription and nothing more. After a modicum of examination the doctor said ‘You might be having an extended heart attack.’ A WHAT?!?! He calmed me by saying that it was probably just an infection but ‘to be sure’ he’d have me do an electrocardiogram (ECG).  I was wired up and tested by a nurse who instructed me to wait to see the doctor for the results. After a longish wait the doctor emerged and appeared a little more concerned than I would have liked. He said the ECG was ‘not quite right’ and that after discussions with a cardiologist colleague of his I was to have a blood test. If the results of that test were positive I was to go straight to hospital; if they were negative I’d undergo more testing and a consult with the cardiologist. And the good news?

Well, I guess the good news was that the test was negative and on that basis the doctor said I should go about my normal life and not worry too much. That’s easy to say but the thought of having a ‘not quite right’ ECG result is worrying and the last thing you want in the week before a rogaine. My preparations had hit a new nadir.

Whether it was a good idea or not (probably not) I went for a couple of runs while waiting to see the cardiologist. I didn’t drop dead of a heart attack and, better still, the cardiologist said he was ‘90% sure’ I only had an infection. I would have preferred to hear ‘100%’ but all the tests were good and armed with the advice that ‘there was nothing to worry about’ (‘unless I felt chest pains’) my thoughts turned to the rogaine – though with more than usual apprehension.

And not long after that I found myself map in hand walking back to our campsite to work out with my team mates, Steve Sullivan and Andrew Slattery, our plan of attack. We also had to decide who would wear the wrist devices (only two per team) and in an attempt to get out of that job I described my medical adventure to Steve and Andrew. Caring guys that they are they laughed and made noises about chopping my arm off should I expire mid rogaine – and I ended up with a control device.

Course setter and organiser, Richard Sprod, had mentioned earlier that he thought that it was possible to clean up the course and a cursory examination led us to the same conclusion. We also quickly worked out that in terms of terrain and distance alone a good number of routes were viable. What decided our course was the experience of the previous night’s moonless dark and the rolling terrain that seemed to offer little in the way of distinctive land features. Our course was based on us getting as many of the controls we thought would be difficult at night during the day.  To clean up the course using our route meant averaging five kilometres an hour so at 11.00am we set out like startled goats. 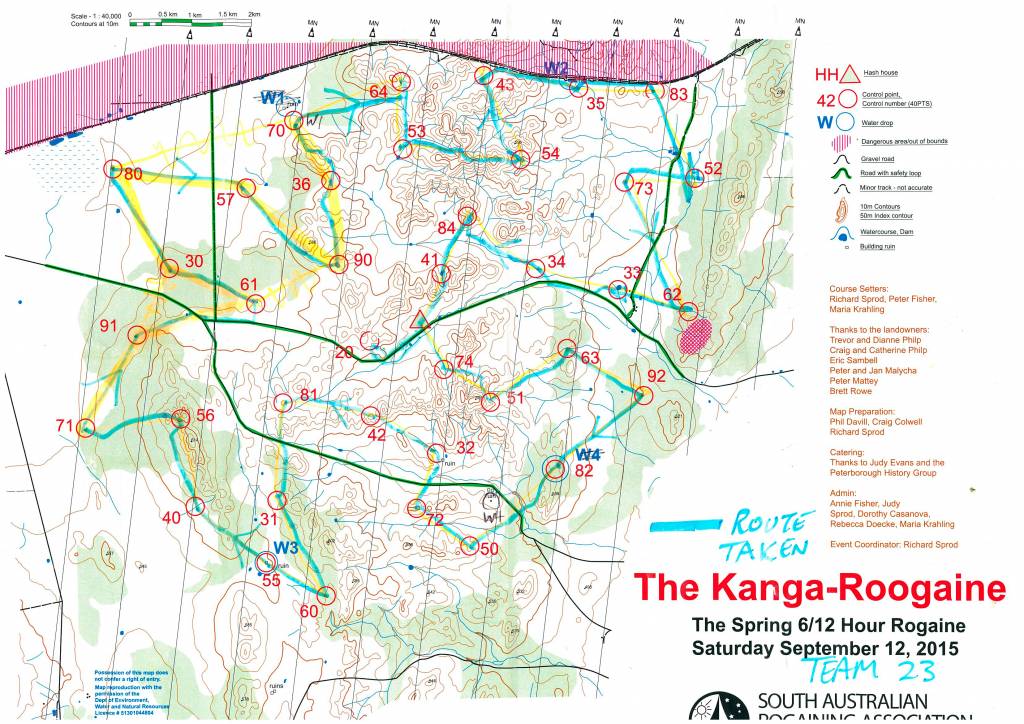 Over the first few hours we built up a ‘credit’ of about 45 minutes but we knew we’d need it come night. I also knew we’d need it because I was growing increasingly tired. It wasn’t my heart, which was something of a relief, but my legs that were feeling dead and I’d run out of energy. The long haul to control 80 across what seemed like an endless plain was, for me, a sneak preview of purgatory and I had a near overwhelming need to stop this @#$%!!* rogaine carry on. Andrew suggested that I might ‘come good’ and that was what I also hoped but certainly didn’t expect. It happened and we made our planned night fall control (70) with time to bag another couple of controls and get close to a third before stopping to put on head lights and more clothing. We’d used every last second of daylight and when we set out again the darkness was complete. It was reassuring then, to quickly and easily find our first night control. The controls kept coming according to plan until control 52. Our strategy was to locate the dams and then follow the watercourse to this control. It looked to be one of the easier controls to find but somehow it all went pear shaped and we wasted ten to fifteen minutes. Bummer. The next control, 73, wasn’t our finest hour either as we strayed off bearing and lost a few more minutes.  Things were back on track for control 62, though, (one we thought might be difficult to find) and clearing the course seemed possible. Then more minutes were lost finding control 34 and by me crawling up the hill to control 84. I was running on empty and our chances of cleaning up were looking thin.

We picked up control 41 and were soon back at the Hash House. I’m always amazed how a few tents, cars, people and a fire seems the height of civilisation when returning to HH after hours in the lonely dark. I didn’t reflect on this for more than a moment though. We had 25 minutes to get our last control, number 20 the one nearest the HH. It was possible but I knew that to get it we’d need to be lucky, to find it with no bother. Our plan was to head up the road until roughly level with the control and then head into the bush (just one more fence to negotiate). 10.50pm was our ‘turn back time’. At 10.49pm, faced with a lot of scrub and no sign of the control we turned back having to run to get in on time. We made it back with a little over a minute to spare but we all had to wonder whether the time spent not finding control 20 might bite us on the bum should we be level on points with another team. At the time, the attempt for control 20 seemed like a good idea but…

Fortunately our worries were unwarranted. We’d won an old boot! (also known as a magnificent rogaine trophy). For me, the added bonus was that although I’d suffered, I hadn’t suffered a heart attack. For these benefits I am indebted to Andrew and Steve and to all those who made the Roo-gaine possible.