With only one 12 hour rogaine behind me (which included a mini nocturnal crisis and a lack of kilometres translating to points) the 12 hour roving event in the Middleback Ranges was an opportunity to redeem myself and get some more experience to improve my rogaining skills.

My teammates, Peter Hamnett and Elijah Bravington, have joined me on previous events and we planned to walk a course (shown in pink) of about 26km on the Saturday and 16km on Sunday. Our actual course (shown in orange) was slightly longer than this at about 45km as we underestimated our pace and were able to pick up some extra controls.

On Saturday we set out from the Hash House heading west to Control 23, looping out and south to the lower, eastern ranges. The beginning of this loop appeared to be a popular route choice, though features were less distinct on the flat terrain.

Heading up into the hills brought back memories of 180 degree compass spins from an orienteering course I did at the same location in 2011, but luckily this time the ironstone didn’t cause us any compass trouble! The Middleback Ranges are beautiful, with fantastic views, interesting rock outcrops and varied vegetation on different slopes and aspects. Geoff Mills, the landowner and course setter, had told us that it had been a good season and we weren’t disappointed with a number of Emu-bush, Hop-bush and Mulla Mulla plants in flower amongst others (our botanical interests have been known to slow us down at times). And I was glad to have my gaiters on when we encountered our first and only patch of Spinifex on the slopes above Control 82.

Our pace slowed through the hills, but we made good time as we headed east across the flats, straight-lining along bearings. We were able to pick up an extra control (#35) before heading north.

As dark came we were grateful for the extra light provided by our new, super bright hand torches which helped us find Control 24 on a broad knoll. We carried the hand torches based on a recommendation from an experienced rogainer at the previous event and it really helped. Pushing on along bearings we found Controls 26 and 44 with not too much trouble – this gave a much needed boost to our night navigation confidence and we arrived back at the Hash House earlier than expected at just before 7pm.

After a good feed and some sleep, we set out from the Hash House on Sunday morning just before 7am, heading straight north to Control 73 and then completing a loop out to the east. We extended this loop from our initial planning because we had extra time available and we’d been able to pick up controls 26 and 44 the day before. Our pace improved along the tracks and we had time to add a trip out to control 95, our only 90 pointer for the event.

We got back to the Hash House with about half an hour to go and in hindsight it would have been good to have had a couple of controls nearby that we could have picked up, but it was not to be and I was glad we didn’t have to run back to beat the clock.

We were really happy with our final score of 1580 points. Every time we do a rogaine we are learning new lessons, tips and tricks – and eventually we’ll give a 24 hour event a go! 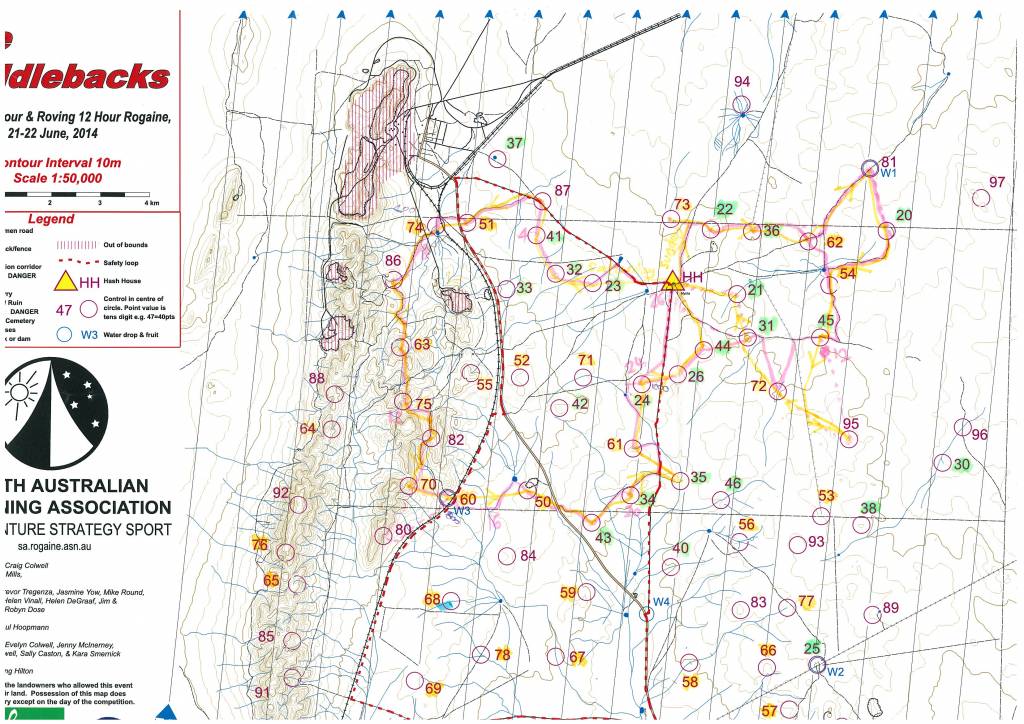