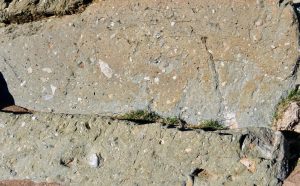 A few hundred metres south of the control are the ruins of the original homestead. It would have been chosen because it was close to permanent water. To the north, alongside the watercourse, are several stone structures. These are mausoleums or burial chambers. The rock exposed in the riverbed is tillite. Note the fragments of rocks and finer debris that has been eroded by glacial action.

The rock strata exposed in the watercourse leading south from the road to the control point is both varied and coloured. 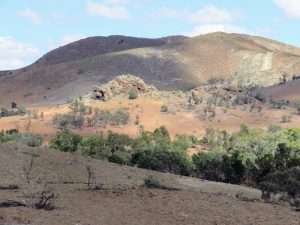 These are spectacular rock formations and are the result of a volcanic “diapir” in this area where magma (molten rock) was pushed up through the sedimentary layers. The intense heat and pressure of the magma greatly altered the adjacent sedimentary layers and turned them into metamorphic rocks. These are harder and more resistant to erosion, resulting in the rock spine.

If you approach these controls from the central track, you will encounter a band of limestone.  This is an eroded “karst” feature. 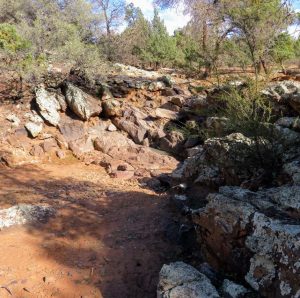 You will find a rockstep with a small spring. This is the only surface water encountered on the course. 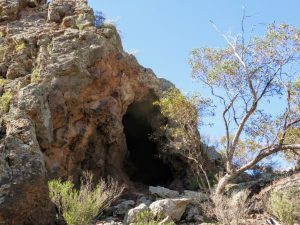 This is a physically challenging checkpoint. It is steep and rocky to approach but you will be rewarded with great views over the course. Under the rocky knoll is a lair.

The rock strata across the course from west to east is close to vertical, instead of horizontal.  Why has it been rotated to such an extent?

Water courses are numerous and very well defined but only flow occasionally. Huge redgums, which require much water, appear to survive despite this.

The vegetation and tree cover varies across the region. The most dramatic change is east of the main watercourse. This area appears to support a greater variety of bird life.

Geological history and climate have sculptured the environment. The geological history interpreted here is part of the “Adelaide Geosyncline”. A deep rift in the earth’s crust prior to 800 million years ago created a basin that was gradually filled up with erosion deposits. Sea levels also fluctuated when the earth experienced several glacial periods. At around 500 million years ago huge tectonic forces compressed and uplifted this formation. The distortion resulted in folding and faults in these layers. Mountains many thousands of metres high were created. These then gradually eroded to produce today’s landscape.

More recent geological erosion of the rock layers has produced various soils and surfaces. These determine the preferred site for the different plant communities. As the newly formed Australian continent has moved northwards, weather patterns have changed, and rainfall decreased. Thus, the watercourses no longer have the same flows as before. Vegetation changed to adapt to the drier climate.

Current rainfall here is around 300mm (although the area has experienced drought for the past 3 years). This rainfall is less than the early and very astute European surveyor, Mr Goyder, deemed necessary to routinely grow crops. The region is therefore best suited to grazing. Significant rain events do occur some years when a tropical low-pressure system from the north pushes far south.  This can unleash torrential falls in very short periods of time. Much of this water quickly runs off, further eroding the watercourses.

Settlement has also changed the landscape. Timber has been cleared for construction of buildings, fence posts and firewood. In addition to the sheep grazing, introduction of feral animals and weeds have had significant impact, in particular rabbits. Regrowth of native plants after two devastating droughts in the 1800s was severely curtailed by these animals.

Weather patterns since Oladdie was established (as an outreach of the Pekina Run) in 1855 appear to have changed very quickly. Springs have dried up. Wells dug to access more water are now obsolete. Water supply is now dependent on bores.  Fortunately, there appears to be enough water deep below the alluvium in the major watercourses to sustain the redgums. For those who are interested and appreciate natural history, Oladdie has much to offer.