Next year we should try to not schedule events that clash with the end of the world. If you missed it, the apocalypse was supposed to happen on Saturday 21st May 2011, the date of our State Championships. This was potentially anyone’s last chance to become rogaining champion of South Australia (and yet we had no women’s team in the 24hr, leaving the feminine fence-post-trophy in purgatory!). 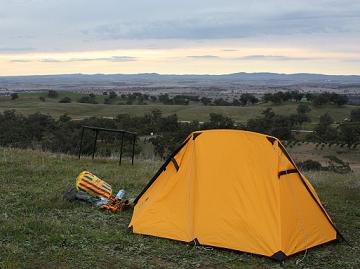 Anyone who attended the event will agree that Bartagunyah provided a tempest of biblical proportions. The wind was incessant and the clouds always ominous. Fortunately the heavens didn’t open until the wee hours of the morning when only 6 foolhardy teams were still out on the course. Everyone else was ensconced in their flimsy tents – flapping against the opening salvo of the apocalypse. And the location of the Hash House on top of a scenic ridge meant we could all savour the full fury of the tempest’s wind!

But the event was, in fact, extremely enjoyable. The views from the Hash House ridge on Saturday morning were fantastic as the sun rose over the vines of Bartagunyah and Mt Remarkable beckoned just up the valley. Well done to Randell Taylor and his setting team for a challenging course in a really beautiful area. This was the second event Randell has set in as many years and I really appreciate his enthusiasm for our sport. Special thanks go to Ruth Carmody for taking on the job of running the Hash House after only being involved in rogaining for a short time. The Admin team, comprising all first-time volunteers, also ran like a dream. It just goes to show that you don’t have to be a super-experienced rogainer to help – and with the effort it takes us to put on an event, we need you too!

You might remember us promoting marshmallows around the campfire for the this event. We’re trying to support the social and casual aspect of the sport. It’s absolutely fine to come to a 24-hour event and only spend a few hours on the course if you want to. As it turns out, the wind was too strong for a campfire, so you’ll all have to come and help us with the two kilograms of marshmallows at our next event.

The world did not end during the State Champs. The news now reports that the calculations were wrong – out by five months apparently. That means the world will finish on the 21st October 2011: the day before our minigaine!