We entered our first rogaine just over a year ago and have been a team since, completing four more rogaines. We’re both long distance runners and have found the navigation part of rogaining an enjoyable challenge. Upon arrival at the Rogainers of the Lost Park event, we were heckled by our friend Randell, telling us that the carpark was actually a couple of K’s further down the road from where we were parked. Randell’s team have done quite well in previous events, and we had pegged them as the team to beat.

Camilo and I work together and had been talking daily about tactics for this rogaine; we decided we should be able to cover about 32km. At our first look at the map we were quite puzzled. There was no obvious path, and a quick measurement confirmed that we certainly wouldn’t be visiting every control. Steve started joining dots that went together well, making sure we had the three Golden Idol clues early on to avoid having to backtrack. Soon we had a large circle drawn with a small inner loop, with short cuts near the end of our run if needed.

We set off eagerly up the hill and headed for #30, “a little library”. Steve remembered seeing a community bookshelf at the Sheoak Café so we went straight there, but soon realised that was incorrect and perhaps we should focus on map reading rather than prior knowledge!  We turned back, running against the flow of a number of teams, including Randell who gave us more heckling, this time about going the wrong way. Fair call.

We were feeling deflated for a few minutes but started collecting points quickly through Belair, however another challenge soon appeared with Steve having stomach issues, moving his focus to finding toilets rather than controls. An hour or so later things had improved, and we were enjoying running through parts of Adelaide we hadn’t visited, until after #54 when we couldn’t work out how to follow the train line to #71. This led to us abandoning our inner loop and went straight to #72 – we were well behind schedule anyway. Around this time, we bumped into two teams of experienced rogainers including a few friends, all of us soon searching for #74 in different places along the watercourse. Eventually all three teams found it, “without accepting assistance from, nor collaborating with, other people, nor deliberately following another team”. I did mention that was an embarrassing experience for all of us though!

We had a fast section of road on the west and north of the map, and recognised Phong from our favourite lunch time eatery, Banh Wagon, with map in hand, and again Randell’s team running in the opposite direction, offering more heckling about going the wrong way. We spotted what appeared to be a team of ex-TRSA (Trail Running SA) committee members near #82 and offered some helpful heckling (we heckled each other a few more times later on), then had some navigational trouble after stumbling across #81. The track to #20 didn’t seem to match the one on the map, but we pushed on anyway before deciding perhaps we were a bit lost, then ran down a fire track to some streets that confirmed we were lost. In hindsight a decent look for a fire track on the map would’ve shown us where we were. We headed back up the fire track and bush bashed our way to a road leading to #20, which worked eventually, and we had enough time to grab the Golden Idol and a few extra controls near the Hash House and finished a few minutes after cut-off. On checking our watch GPS we were surprised to have covered 35km, but were well under the point total we were aiming for.

We were genuinely surprised by the results and expect many other teams found it challenging too. Challenging is good! We had a fantastic day, and we will continue to participate and hopefully learn and improve along the way. A big thank you so the organisers and volunteers, and full credit to the course setters! 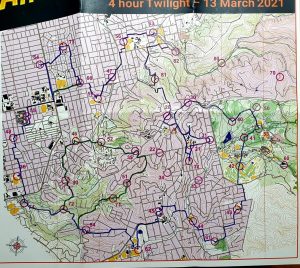