We’re excited to have you as our new President of SA Rogaining.

Thanks, it’s an honour to be part of such a great committee, and humbling to follow past President, Kate Corner, and Mark Porter before her.

What/where was your first rogaine?

My first rogaine was an Adelaide University Mountain Club event in 1982, I was 16 and went with some friends from school – we were in our school running group together and were also all keen on bushwalking. The event started at Strathalbyn. I could barely tell one end of a map from another and was really just along for the adventure. Our team became completely lost late at night in Kuitpo Forest, complete with mist and full moon. I had recently seen the film ‘American Werewolf in London’ and having a vivid imagination, I was quite frightened! We never found the control we were looking for and headed out into the farmland where we came across local farmers out spotlighting. That also had me worried. We then had about 10 km along a dirt road to get to the compulsory stop at the all-night soup kitchen at the Finnis Hall. We were meant to be there at midnight and were docked all our points for getting there at 4 am!  I remember we jogged parts of this road and I found it interesting that we could still run after all that time on our feet. (While I was keen on running, in training for a marathon at the time, I had never done anything that lasted this long before.) After we had a few hours’ sleep, we had to jog to make it back to Strathalbyn for the midday finish. I think we were pretty close to last in the results. I had never done anything like it and as you see I still remember it after all these years. The same school mates and I participated in another rogaine at Parawa a year later, but I insisted we were back at sunset that time for a good night’s sleep and best pickings at the Hash House.

After your first rogaine, did you jump in ‘boots and all’ or did you take it more slowly?

After 1983 my next rogaine was in 2000 with Andrew Murphy, the 6-hour ‘Mt Misery’ Metrogaine based at Lenswood, so it was a slow transition!  After this event though I was pretty well hooked. 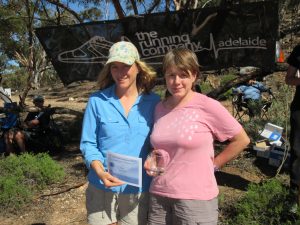 Over many years, you and Jenny Casanova have been a team that many of us admire and secretly (or not so secretly!) wish we could beat. Please share two (three?) key reasons for your success that the rest of us might be able to work on to improve our competitiveness.

What was your most memorable rogaine and why? I know, that’s a really difficult question!

You are quite right, that is a very difficult question – I’ve had to go away and think about this.

I have listed several highlights, clambering for most memorable spot in my mind. I know, that is cheating:

Oh,  and in the 2013 World Champs in Russia,  Suzanne and I found out afterwards that we were ranked ‘best planners’ for our route, having most points per km, after using our planning time thoroughly to look at many options to maximise efficiency. This ranking did not take into account that some of the legs went straight across marshes, which were, frankly, awful to cross, and didn’t include going out of the way to the water drops. But it sounds good, anyway, I once dropped that in a job interview ….

Also in the Russian rogaine I was exposed to communal trenches for toilets, that was pretty memorable. The way to cope was similar to being in a lift, to keep your eyes straight ahead, don’t make eye contact with your fellow toilet user alongside. 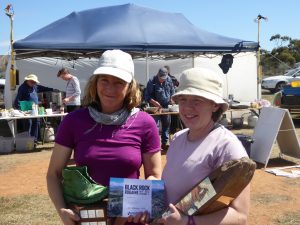 a rogaine that you’d prefer to forget?

Pretty well most of the World Champs I have been in – 2006 Warrumbungles NSW so hot, running out of water,  and a lottery as to where the vegetation was really thick and where it was ok; New Zealand 2010 where Jenny and I became sick of the electric fences and so cold in the exposed windy and wet conditions that we bailed and came into sleep at 3 am; 2013 Russia, with Suzanne where we had hoped to cover more ground but I found the heat, humidity, marshes and MOSQUITOES made for a very tough event where the best part definitely was finishing!

We all love rogaining because of the chance to explore different regions. I know you’ve been fortunate enough to compete in many rogaines around the world – where would you love to go back to, and why?

I have only actually been to New Zealand and Russia. I would definitely love to do more overseas rogaines in the future but to be honest my favourite rogaining terrain is in SA! (I really don’t cover the ground well in thick vegetation, I am not tall enough, so SA terrain suits me.)

What exercise regime do you have to enable you to be so competitive in a 24-hour event?

I have loved trail running in the bush since my teens and have always lived in the vicinity of Belair National Park. Like many in the Rogaine community, I find getting into the bush to be regenerating for mind and body. Most weeks I run 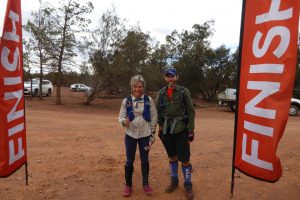 around 4 hours in total, or more if I am training specifically,  1 – 2 lunchtime swims, as I work next to a lap pool, a bit of commuting by bike (not enough) and I generally attend Pilates each week. For the last 10 years or so I have had my own live-in personal trainer, Callum the kelpie, and now together with his young niece Roo, they insist on regular runs.

What food can’t you do without in a 24-hour event?

Variety – real food and plenty of savoury options. I love rolls with grated carrot, cheese and peanut butter cut into quarters, dried fruit and nuts with added salt, fresh fruit and cucumbers (these are so refreshing and travel well, although make nasty future surprises if you forget to remove uneaten ones from your rogaine pack!) I also carry gels and ‘energy blocks’ (gels in jube form).

And finally, what do you look forward to the most after a 24-hour rogaine?

While all of the above apply, without a doubt, number one for me is a great big mug of tea!! Closely followed by a swim (which has only happened once, in a 24-hour rogaine in Tassie where the HH was alongside of the South Esk River). I enjoyed the water so much I missed out on lunch. Sadly.

Thanks, Zara. We look forward to the coming year/s with you as SARA’s Head Honcho.