Thanks for agreeing to be interviewed, Doug. You’re organising the upcoming Velogaine – what is your first love – cycling or running/hiking?

That’s a really hard question. I spend a lot of time on my bikes and they give me that intensity of physical exercise and time to think and solve problems. So quite a solo experience. Rogaining delivers some very different things that I love. It’s conducted in the bush in really interesting places, physical effort, there’s the element of teams, mateship and strategy, the challenge of navigation and the great camaraderie of the sport. It strips away anything artificial from people – after 24 hours of rogaining you see them unfiltered.

How did you become a rogainer? 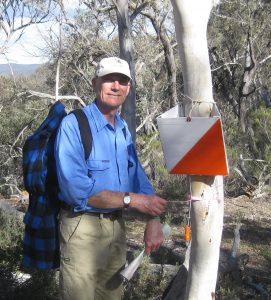 By accident really. Way back an Army mate asked me if I wanted to form a team for this rogaining thing. We were posted at Wodonga at the time and once he explained it was like score-orienteering, I was in. Turned out that’s about all he knew. The event was the Victorian Rogaining Association 1983 Spring 12-Hour at Tonimbuk, just east of the Dandenongs. We really had no idea and drove 5 hours down from Wodonga on the Saturday morning stopping to buy two orange Eveready Dolphin torches and a tent on the way. In those days you had to mark up your own blank topo map from a master map. By the time we got there it was about 1130 hr and people were already assembling for the start briefing. So we scribbled some of the controls onto our maps, leaving off any we didn’t think we’d get to, threw some contact adhesive plastic onto it to stop the paper wearing away and ran off after the crowd at about 1210. Our planning was awful and, to make matters worse, in most cases our control “circles” weren’t even in the same spot between our two maps. We visited 25 control locations only finding 22 controls. But through sheer enthusiasm, and the tolerance of pain as a 23-year old male, we came 7th out of 136 teams. I was hooked. I moved to Melbourne the next year and before I knew it I was VRA Secretary.

What is your most memorable failure on a rogaine?

Well, the Tonimbuk 12-hour preparation is right up there! After that I was a lot more careful about marking up my maps. Now of course they are pre-printed, which has removed a really significant amount of time from the planning cycle and greatly improves accuracy. The most recent failure that Bruce Greenhalgh and I talk about every time we meet was Control 82 at the Black Rock SA state champs in 2017. It was just after dark, we missed a creek junction, wasted at least 30 minutes searching in topography that didn’t match the map, then gave it up. About 400 m later we regained our positioning but didn’t have the presence of mind to turn around and go back 700 m to bag it. Turned out to be a very wasteful choice.

And how about your top one or two ‘high five’ moments?

Undoubtedly when Bob Daley and I bagged 6th Mens at the 6th Australian Rogaining Championships in 1985. There were 160 teams as it was held not that far north of Melbourne and at that time rogaining was quite new and attracted a lot of interest and competition. The VRA was the rogaining powerhouse for the sport at that time. More recently, I think it’s great when we see a really strong turnout and there is a real buzz afterwards among all the people that enjoyed it and appreciate the effort the volunteers have made. Some people just bounce around with excitement at the thrill of running and finding controls.

I’m a mechanical engineer by profession, specialising in the engineering management of complex systems. For the last couple of years, I’ve been employed by a consulting engineering company Kellogg, Brown & Root (KBR) where I tend to get given roles that need some care and attention. At the moment we are mostly working from home and I’m managing the KBR Sydney office from Adelaide, probably until Christmas.

Why did you choose to join the SARA committee and put your hand up to be the Treasurer?

Joining the committee was just the next step after volunteering across the whole range of jobs that are needed to make events happen. At the end of the 2018 metrogaine I just had a short lapse of attentiveness and stepped forward when President Kate Corner asked the AGM whether there was anyone that wanted to join. I think everyone was surprised. Getting to be Treasurer was the result of sitting too close to Anton Steketee, the previous Treasurer, on the day he announced that he was moving to Canberra.

What sort of physical preparation do you do to keep you rogaining fit?

Nothing special. Luckily cycling is a very close proxy for climbing hills on foot – exactly the same muscle groups. So averaging 50+ hours of Adelaide Hills riding per month does it for me. But don’t ask me to run on the flat anymore. Unless it’s to get that last control with only 20 minutes to go.

We all love our food while rogaining – what’s your ‘go to’ food for a 24-hour event?

The next bit that I’m going to eat. Those close to me know that boarding school and 20 years of Army rations reduced “food” to “fuel”. So, anything that you can shove in your pack will do me. The more sugar and fat the better.

What would be your top two tips to tell a rogaining novice (apart from ‘Learn how to use a compass!’)?

Be very careful as you transition from day to night. That first control after twilight is so often the one that you miss or waste a lot of time finding – Control 82 at Black Rock was a good example. Try to have a good handrail (ie a road/major track/significant creek) until you’ve grown accustomed to night navigation again. Navigation in the dark is all about accurate bearings, pace counting and trusting the map.

Secondly you need good walking shoes or boots. Some terrain is really rock filled and leads to bruising and tenderness through the soles if they are too soft. Most running shoes aren’t rigid enough. And your shoes/boots need to be able to restrain your foot tightly enough across the top so that your weight is not passing through your toes as you walk down steep slopes or you end up with black toenails.

Rogaining is like everything in life, you get out of it what you put in. The jobs we do to organise events are more fun than work and, when combined with the opportunity to compete, a real SARA community is created.