After competing overseas in the World Rogaine Championship in Finland, it was very comforting to be back on home soil, for a typical well run local event with great Hash House food, a teslin map and lots of kangaroos. 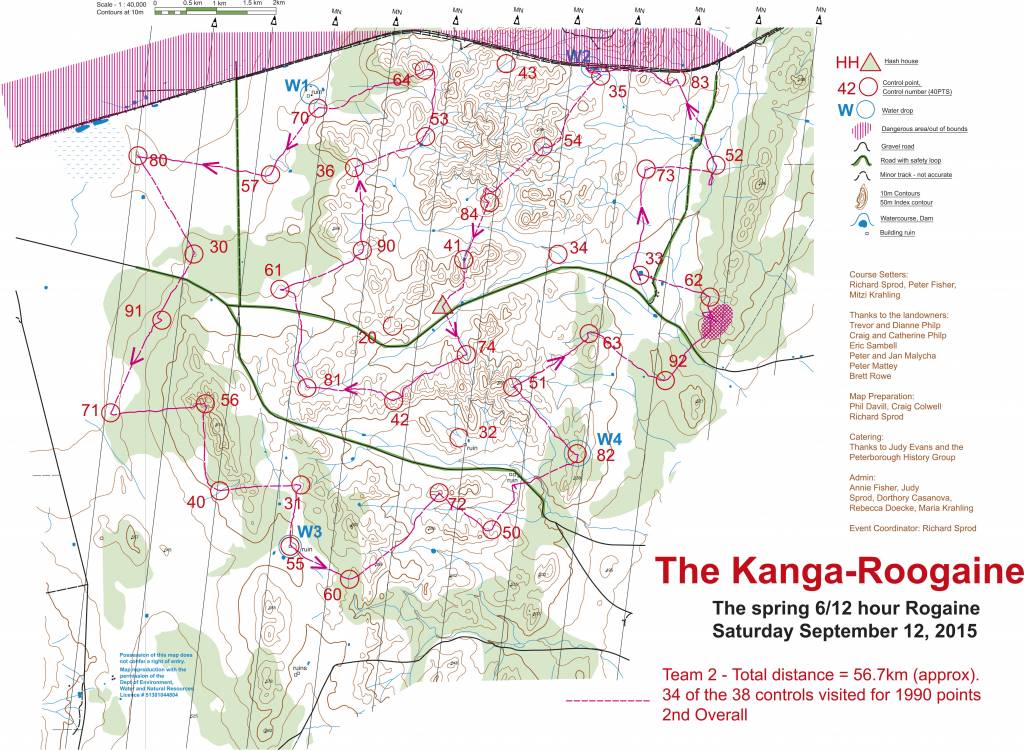 For the World Championships event we had our course mapped out and set within an hour, but for this one, we agonised over it for our full 2 hour planning period, not sure if what we had come up with would be achievable.  We knew the terrain was going to be relatively flat and were hoping to be able to straight line most of our “legs”.  We quickly decided that we wouldn’t be able to get all the controls (but thought a few teams might), so decided to drop some of the 30 pointers (31, 32 & 34) plus the awkwardly placed 20 pointer and 43 at the north end of the map.

Numerous route choices were mapped and measured and points check for each, finally choosing the one which gave the most points for our very hopeful 52km straight line distance.  Being optimistic we also worked out options to get 31 in the SW and 43 in the north if we were travelling well.

Listening to the briefing kept the nerves strung out as vague creek lines, a very dark night, prickly cactus, un-marked ruins and wells were mentioned as well as a ‘shy stripper’ being at Control 57 (an unusual control description but one lives in hope).

At 11am we were away following the “gun team” of Andrew, Bruce and Steve to C74.  They quickly drew away from us and were not seen again.  After the first control we were on our own, generally only seeing teams going the opposite way or at Controls.  This had us a bit concerned thinking we might have fluffed our route choice.

To complete our course we needed to be travelling around 5km/hour which was easily achievable over some of the open flatter areas but wasn’t going to work through some of the thick mallee or dense undergrowth in the hilly sections.  During the day our navigation seemed to be almost spot on and Evelyn and I seemed to be working well together, but at night things became a bit more of a challenge especially at C33, 52 and 35.

We had decided that we needed to be at C62 by 8pm to have enough time to finish our course and get the extra C43, but with time lost looking for 33 near the dam and getting a bit confused in the creek systems at 52 and 35, meant dropping 43 and heading home via the hilly and scrubby route via C54, 84 and 41.

One of the nice things about this event were all the torch lights to be seen under the dark starry night, knowing we weren’t the only crazy people out enjoying ourselves.

Well done to Richard and his team.  A number of very challenging control locations (though the stripper was a bit of a disappointment).  The course seems to have been almost perfect with one team so, so close to cleaning up.  Thoroughly enjoyed coming back to the SARA HH for great food, a lovely big bonfire and great company.  I think SA does it better than anyone else.