My name is Sef and this is my story about a geocacher who wants to be a rogainer.

I have a 15 year old son, Callum, who three years ago could not think of anything worse than hiking in inhospitable terrain.

In the ensuing years, Callum discovered there is more to life than playing FIFA and Call of Duty. We started attending group gym sessions three times a week and Callum has now became almost fanatic about his fitness and strength. 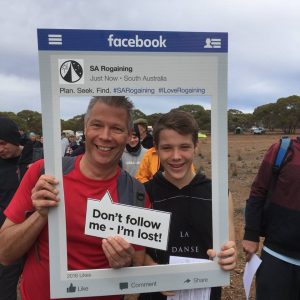 Last September we decided that rogaining could be the ideal activity for us. It would satisfy my urge to hike to unchartered places and Callum’s urge to keep improving on his exercise regime. And it promised to provide great father-son bonding time.

So some basic camping equipment was bought and two ‘training’ weekends were organised where we hiked about 30km.

It was a long wait for our first opportunity to rogaine as there are no events in summer and we had to miss the 4 hour event in March.

So we decided on a baptism by fire at last weekend’s State Championships, albeit we (wisely) opted for the 12 hour event.

As we didn’t want to be completely underprepared I asked a good friend, Randell Taylor, for advice and over a nice glass of red wine he imparted as much wisdom as he could. He even had a map of the 2009 event in the same district!

So how did we go? 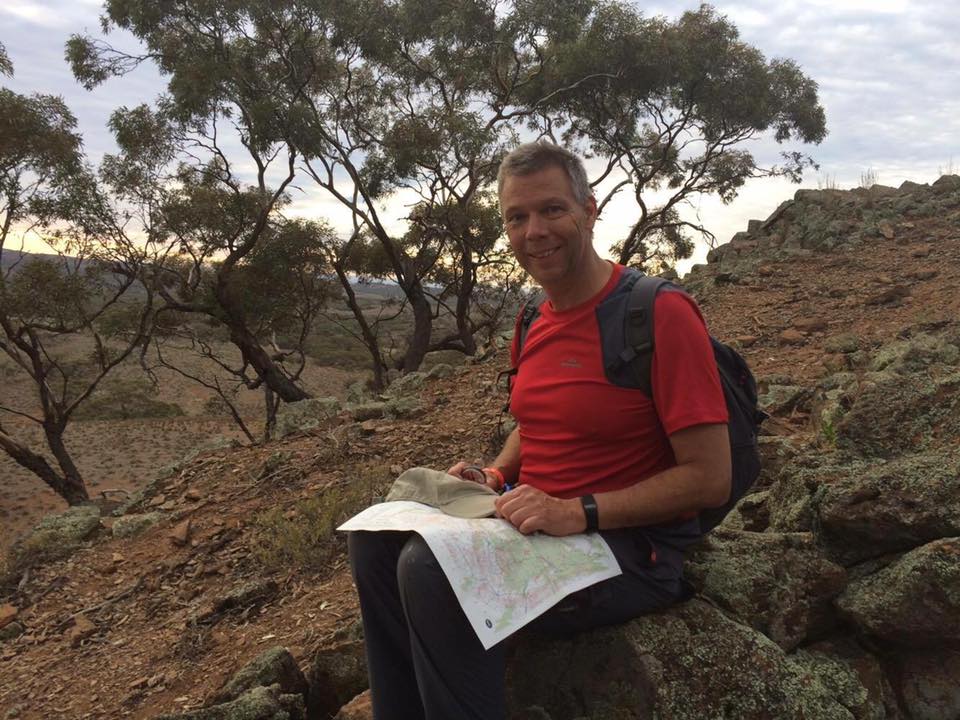 The alarm was set for 5am, but there was no need for it as my restless night was self-terminated well before 5am. Some pikelets and a few hard boiled eggs were consumed and soon we were on our way.

We arrived precisely at 9am and immediately received our maps. After putting up the tent it was time to strategise. But where do you start when you have no idea about the terrain around you. Are the 80 and 90 pointers too hard to get to or too hard to find? What distance could we cover in 12 hours? How much of a detour should we plan? To the best of our ability we planned a 24km loop for the Saturday and 21km loop for the Sunday, which would get us just shy of 1400 points. I had no idea if this was ambitious or realistic.

After all the briefings we were off. Callum immediately wanted to start running but I thought it better to curb some of his youthful exuberance. First stop, control 38, top of the hill. With over half of the competitors opting for this control first up, there was no real challenge in finding it and our historic first ever points were scored after 15 minutes. Also our second control (#67) felt like a mass walk, albeit the group in front was now 200m away instead of 20m. Control 59 and 37 followed but gradually we found ourselves devoid of visual contact with other competitors.

Control 37 to 68 was over 2km. I had taken some bearings and it was our aim to get to the path that was on the map and to navigate to the knoll near the control and from there to find the saddle.

This is where Rooky Mistake #1 was made: A path on the map is not necessarily a path on the ground. 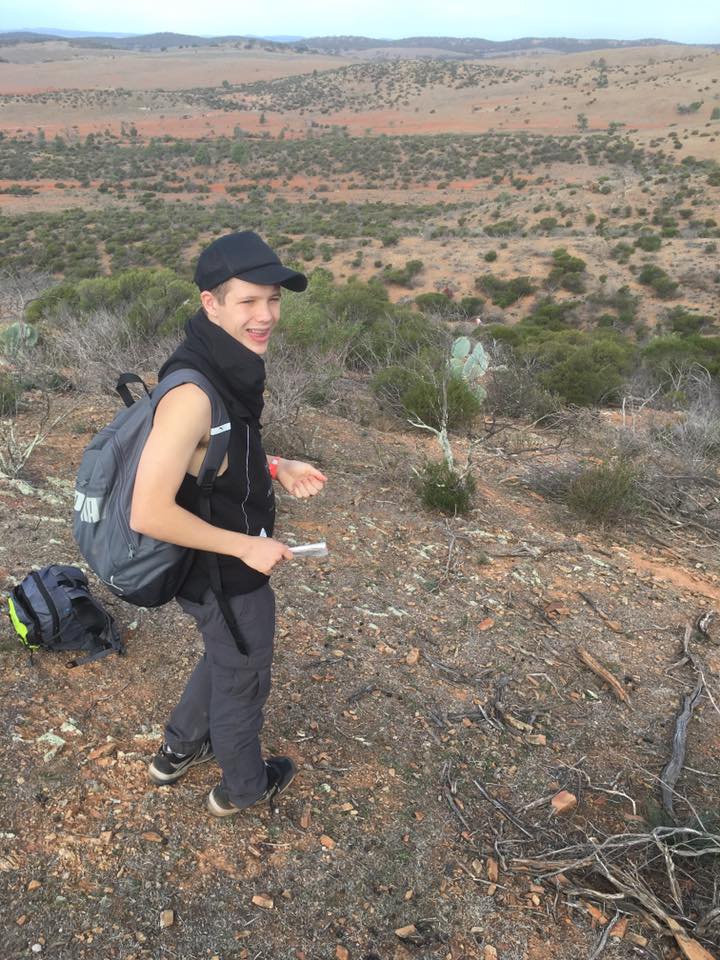 Failing to find a ‘well defined path’ we proceeded on our bearing and decided to count water course crossings. Time for Rooky mistake #2: Watercourses all look the same on the map, but they are oh so different in real life. And when is a watercourse marked and when is it too small to be marked?

Still, we soldiered on with a rough idea where we were, but no saddle in sight. We proceeded to the top of the nearest knoll and luckily eagle-eye-Callum spotted the control some 300m away.

Control 86 was next, our only 80 pointer on our menu. I expected a tough initiation but after walking on a bearing for less than 1km Callum spotted the control from 700m distance. How easy is this I thought!

Also the next four controls (46, 45, 56 and 57) were found with relative ease, as they all were close to the top of easily identifiable knolls and so after 4.5 hours we had 540 points in the kitty and we were well on target to get back to the HH between 6 and 6.30pm. This prediction was great for Callum as he had actually twisted his ankle after control 46, which did hamper our progress.

They say pride comes before a fall, as we never realised we made the biggest rooky mistake of all: Rooky Mistake #3: We did not keep track of distance travelled.

I always thought traveling from 57 to 47 on the contour line was going to be tricky. But in the end, we did manage to arrive at a watercourse. Unfortunately, we could not find the desired junction as we didn’t realise at the time that we were still a gully and 200m short of the actual intended watercourse.

And this is where it all turned to poo.

With no idea how to find this control, or how to get to the next, we had to cut our losses and head for the safety track. Darkness was starting to fall and we just could not find this track. Luckily for us we bumped into team 23 who pointed out the windmill on the map that we were just about standing on.

Time for rooky mistake #4 and our biggest mistake. A watercourse is not a safety loop.

This may be stating the obvious. But from our meeting with Randell I recalled him talking with enthusiasm about the great Nackara River. A wide north-south creek bed used by the owner to traverse his property. And I (erroneously) recalled that he was also referring to this creek bed as the safety loop. What a mistake to make. We hopped into the nearest wide creek bed and started following it. You’d think that the rocky section, the south easterly direction and the fence across the creek bed would have raised some alarm bells, but no, we kept going until the terrain started going uphill. Needless to say 45 minutes later we were back at the windmill. It was pitch black by now.

We still had no idea though where the actual safety loop was or what it looked like and in the dark any kind of clearing looks like a track. Still we thought we learned our lesson and actually counted our steps from the windmill. About 400m we thought. 495m later, still no track!

Resigned to the fact we must have missed the track we took the only logical option and started walking south. This is where the rogaining gods took pity on us as we suddenly saw some lights behind us. “They must be on the track”, we muttered and we started walking towards them and literally 10m later we hit the safety loop.

With our confidence severely dented we decided to stick to the track and skip control 35. â’We now need a junction with a track to the westâ€ I relayed to Callum and we continued on our merry way. This is where rooky mistake #5 occurred: Not all tracks are on the map.

Already guilty of Rooky mistake #3, we had no real idea how far we had progressed so when a junction was found we promptly took it, even though we did have a burning gut feel that something was amiss. The track happened to follow roughly the same direction as the actual junction we needed and we even found the left turn towards HH that was required. Except we were about 1km further north than we thought. We realised things were not quite right when we discovered (in Callum’s words) Ivan Milat’s caravan.

So we were lost for the third time and this time we really had no option but to start walking south.

Luckily for us, the HH lights stood out like a beacon and at 8.30pm we were very relieved to clock out again. 3.5 hours wasted for a grand total of 0.0 points. 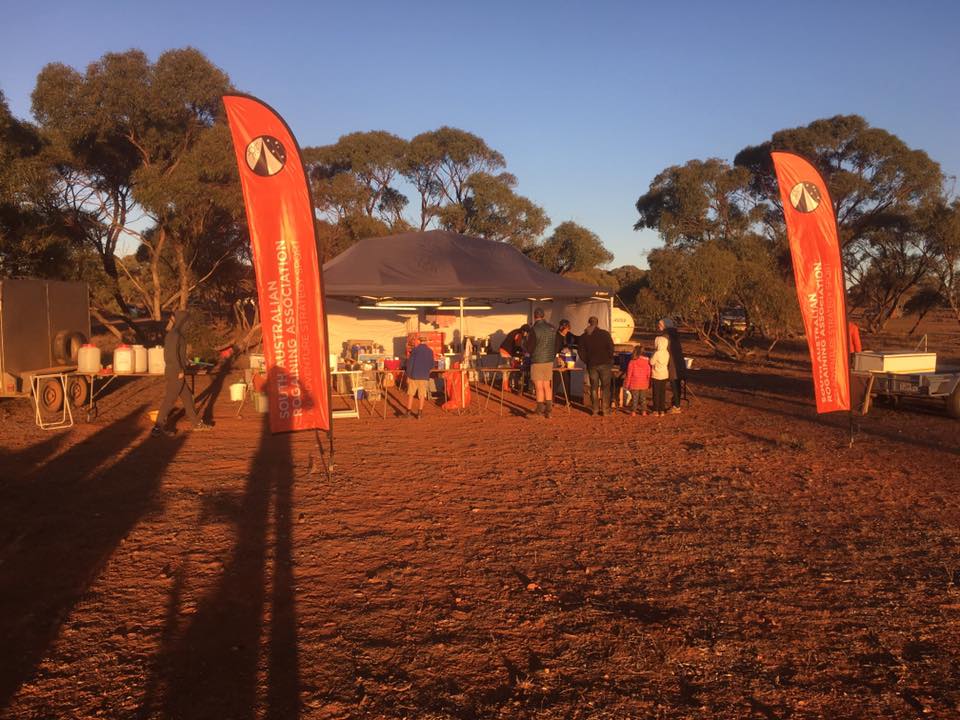 Needless to say the dinner at the campfire was the best dinner we had ever tasted and the red wine I brought tasted like Grange.

The silver lining around the cloud meant we could ‘sleep in’ to 6.45am and have a leisurely breakfast. The cheese toasties and fruit salad were just the tonic to revitalise us and at 8.15 we were on our way again following our hastily altered and reduced loop. Controls 22, 49 and the awesome rocky outcrop in the middle of the Nackara River (65) were found with ease and things were looking good again. 65 to 75 looked tricky so we made sure we counted steps this time and literally walked straight to the control point less than 10 paces from my estimated step count.

“We nailed this one”, I told Callum and suggested the same approach for 75 to 51.

Enter the last Rookie mistake (#6): You don’t know when you overshoot your mark.

The trek was straight through the Mallee bushes and keeping a bearing and counting paces is no mean feat in that type of terrain. Still we got to the watercourse when we expected to, but could not find the windmill on the map. â’We’re probably shortâ€ I said as we progressed westwards, but alas it seemed we had overshot the mark, as said windmill was never found. 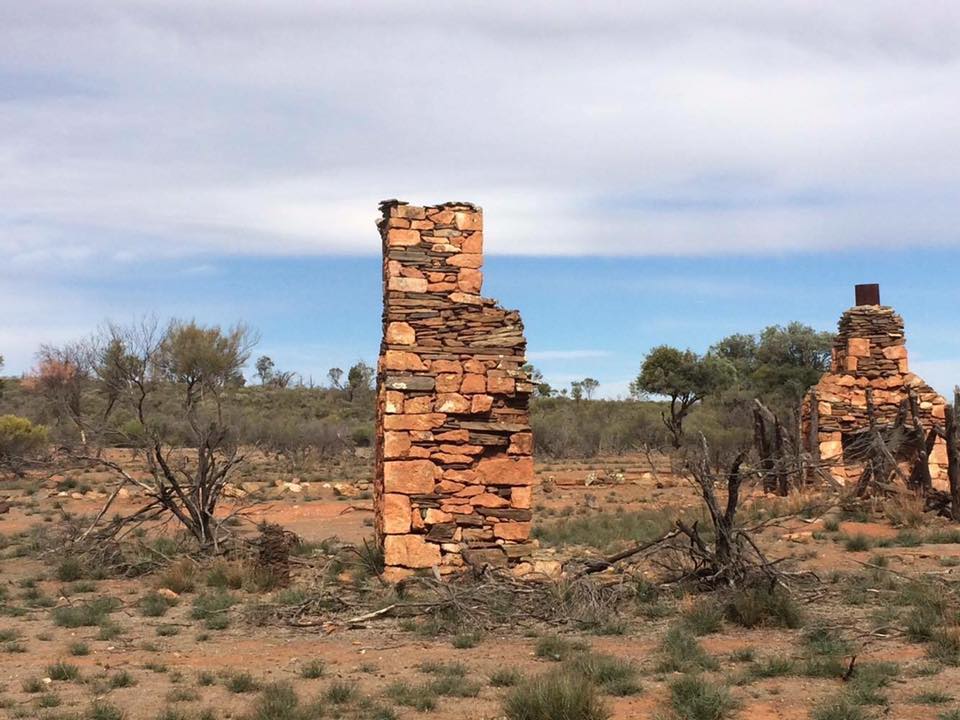 So not knowing where we were (again!.) we took the next main watercourse south, straight to control 41 we thought, but again we were one watercourse further west and we hit the safety loop. This time we did learn from our mistakes and actually navigated successfully to 41 and went straight back to the HH. We needed to motor on that last stretch but still managed to get back with 11h.56 on the clock and a total of 720 points (giving us 12th position out of 26).

Seven days later, I still find myself regularly thinking about the weekend. I still look at the map a number of times each day, lamenting where we went wrong, but most of all remembering what a great weekend we had.

We’ll never be able to really compete against the navigation genii and ultra-distance runners but I can promise one thing: We’ll be back!!