By Jo Powell – the setter of the 6-hour event

Wow – what an awesome event it was on 14 March (feels like forever ago now). Just squeezed it in before all the restrictions came into play a few days later! Thanks to the 400+ people who came to check out ‘one of Adelaide’s best kept secrets’ – now not so secret.

As the setter, it was an extremely satisfying day. The sun shone, people came, Admin worked smoothly, teams scattered in all directions at the start. Families had fun, rogainers of all abilities were challenged, there were no major injuries. All the pizza arrived and most was eaten, results were produced quickly and everyone seemed to enjoy themselves. All the work was worth it – and more!

While I love to compete in rogaines, there’s something very special about setting a rogaine. Yes, it’s lots of hard work, but the intimacy that comes from deeply exploring an area is addictive and the buzz of happy competitors is a (legal) drug.

Sturt Gorge is my favourite local haunt. I have three main loops that I frequently walk, depending upon 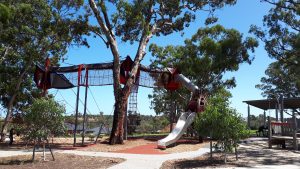 my mood and time available, and I have explored most tracks over the past decade. Around three years ago I started wanting to set a rogaine there so have been noting interesting spots while out on my walks. However, once I had the green light from the committee and started truly exploring every little hidden track, I discovered little pockets of scrub I didn’t know existed and stumbled across cool playgrounds (I have three young grandsons so knowing the locations of great playgrounds is very useful!)

Ahhh, the power of control placement. It’s both a burden and an ecstasy. Setters strive to have the right mix of straight-forward and more challenging locations. You want those locations that are a little obscure

but with strong ‘attack points’ (eg control 91 which was difficult to pick from the track level, but the attack point was the overhead power lines), or locations that are tricky to get into (eg control 92 that was fairly easy from the western creekline, but difficult from any other direction). Then to find the fun locations such as control 53 on top of the train tunnel. My 3-year old grandson was incredibly excited when the train went right under his feet and the train driver blew the whistle just for him, or so he thought!

Then there’s the control points that look good when you’re ‘armchairing’ the course (ie planning control points from the comfort of your armchair), but when you’re actually in the field the vegetation/environment is vastly different to what you were expecting. Eg control 50 was supposed to be 200m further east of where it was located – it took me 10 minutes to fight my way through the dense olive trees to the point I had determined, but then took me 30+ minutes to try and fight my way out again. I scrapped that location!

While I was out scouting and gpsing control locations, others were creating the map. This area was very complex as there were many new tracks and subdivisions, and the data required to build a map had to be sourced from many different places. Our wonderful map guru, Craig Colwell, together with input from our IT whizz, Steve Gray, produced a beautiful, accurate map. Countless hours were spent layering the data and ensuring it was accurate. Craig even manually drew every piece of vegetation using Google Earth as his source of truth. Using my intimate knowledge of the tracks and extra groundwork, we tweaked tracks and creeklines up to a week before the rogaine to accurately record the environment.

Peter Milnes was my vetter. He took a draft edition of the map and walked the entire area taking meticulous notes on the suitability of each control location, how many points he thought each should be (based on how difficult he perceived each control was to find) and whether or not the control circle was exactly in the right position. We had a few good arguments, some of which I won, some I conceded. He was worth his weight in gold and ensured total accuracy of the map.

With all the elements in place, now it was just a waiting game to see who would enter. As a competitor or a setter, I eagerly wait to see who’s competing in any rogaine. This rogaine was particularly exciting, as so many awesome competitors had signed up. The big question was now, who would be the winning team? Would it be the ultra-marathoners, trail runners, the junior orienteers, the adventure racing team or our top rogaining teams?

In the end, the ultra-marathon trail runners won ‘comfortably’, ably lead by Randell Taylor and supported by Ryley Smithson, Marcus Staker and Isaac Kalleske, beating the junior girl orienteers comprising Meredith Norman, and Abigail and Joanna George. They in turn beat rogaining stalwarts Bruce Greenhalgh, Steve Sullivan and Phil Tetlow. Unfortunately, the adventure racing team of Morgan Coull, Owen Jones and Rurik Symon started 25 minutes late after waiting for their 4th team member who was a no-show – they still managed to come in 6th. Interestingly, the team of Bek Newbold, Jess Tsakiris, and Peter Aitken had the best points per kilometre travelled score (distance efficiency). Well done to them for great route planning! 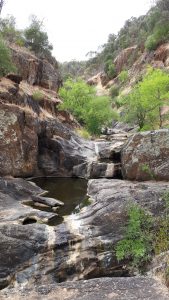 Looking at routes and controls visited after the event, I was gratified to see that many teams chose to go into the guts of the gorge – in fact, the Cascades (control 82) was the most visited control after the controls closest to the Hash House. Sorry it was such a tricky little tree to get into, unfortunately, there weren’t any better trees on which to hang the control. The Cascades is a very pretty place after heavier rain – and there’s great rocks in the river for kids to play on just downstream from there.

I would encourage people to continue to explore the Sturt Gorge Recreation Park, particularly in this time of no gyms and organised sport. Dogs are allowed in there, on leash (rangers have been known to patrol the park and issue on-the-spot fines for unleashed dogs).

There is a lovely, well-sign-posted trail called River Trail that follows the Sturt River from Horner’s Bridge (where Murray Hill’s Rd crosses the river in the very SE corner of the map) all the way to South Road (Riverside Drive). It’s 10.5km from end to end and I highly recommend it. Either park a car at both ends or get a long-suffering partner/parent/friend to pick you up. However, take note that the river is difficult to cross during the wetter months after heavy rain, unless you want to get very wet feet (and potentially wet body if you slip in).

If you didn’t manage to get to the event, you can still download a map from SA Rogaining’s website or there’s suggested trails on Walking SA’s website. Happy exploring!