The Victorian Rogaine Association hosted the 2014 Australasian Championship and set the event in some excellent rogaining country, south of Castlemaine, over the second weekend of October. The Hash House site was in a beautiful location along Vaughan Springs Road, adjacent the Loddon River. Many competitors used the bunk bed option with hot showers. Others camped in a paddock across the road. We opted for a cottage in the nearby historical town of Maldon that we had visited on a previous Orienteering Carnival.

It was obvious that the organising team had gone to a considerable effort to make this event a success.  A model course was available on the two days preceding the event to acclimatise interstate teams to the local terrain.  The event t-shirts, which all competitors received, were well designed and were worn by many during the event.  The Hash House, which we only used at the completion of the event, certainly met our needs and food seemed wholesome and plentiful.  All of the event controls were brand new and highly visible.  The map was larger than A2, 1:30,000 scale, covering approximately 200 square km.  However, the Victorians don’t use waterproof teslin paper for their maps so map bags or clear contact covering was needed to protect the map.

Unfortunately, the weather was warmer than the average expected in this area, resulting in some competitors suffering from dehydration, hyponatremia (over hydration) as well as hypothermia (it turned quite cold in the early hours of the morning especially in the low lying river system).

After a sleepless Friday night (pre-event nerves) we arrived at the site about 8am Saturday morning and quickly set up our camp and got our gear ready.  Safety gear checked and maps collected we spent the next 2½ hours sorting out our route and finalising our gear. 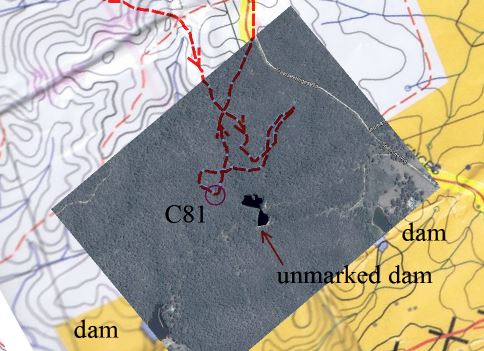 On the way to our first control, C40, we had to cross the flowing Loddon River twice. Evelyn took her brand new shoes and socks off for the first crossing – very time consuming.  At the second crossing we found a dry crossing point, but we had to cross the river a third time, on the way to our second control, C67, and we both sloshed our way across the ankle deep river.   We had opted to head towards the NW corner, where we thought there would be less climbing, then work our way along the northern side of the map and come back towards the HH through the middle depending on available time.  As it turned out, we were very optimistic on what we could achieve and by mid-afternoon the heat and previous sleepless night were taking their toll.  A brain fade near C81, combined with a very large unmarked dam adjacent the control (which I confused with one in the out of bounds area), put us further behind our schedule, and by late afternoon we were forced by low water to deviate to W20 (which we were initially not intending to visit due to its location). Frustratingly, when we arrived all four water containers were empty and a number of other teams were also affected.

At the water station, one of the university team members asked why we did this sport (they had to do it as part of their Outdoor Ed course, not because they wanted to).  At that stage of the day I couldn’t come up with a logical, positive answer.  Darkness settled in on our next leg to C104 and, after being bitten by a very large inch ant and being hassled by mozzies, flies and moths attracted by our head torches, getting back to the HH and our comfortable campsite seemed a very attractive thought.  However, as the HH seemed an impossibly long distance away, and because we had already collected most of the controls between where we were and the HH, we continued on at a very slow pace hoping to revive in the cooler night time conditions.

Unfortunately, night time conditions were still warm, especially under the forest canopy away from the significant creek lines.  The track network appeared to be accurately marked which provided some assistance during the night and some relief from the undergrowth, which at times was a nuisance.  The moon was late rising (about 10.40pm) and didn’t become very effective until after midnight.  At night we needed to micro-manage each leg to stay in touch with the map and the terrain (sometimes not very successfully).

Approaching W01 at about 2.30am, still conserving our meagre water reserves, we were worried that this water station would also be empty.  Having each only consumed about 2.5 litres of water in 14½ hours we weren’t in very good condition.  Fortunately there was plenty of water for us to re-hydrate and fill our bladders and containers.  At this point we rugged up with thermals and collapsed on the ground for about 15 to 20 minutes, with a number of other similarly exhausted teams.  Before long we noticed the temperature starting to plummet and needed to get moving or risk suffering hypothermia.  The next 4 hours to dawn were strained as both of us were at very low ebb.  Other teams seemed to be rushing past us and one of the uni womens’ teams were running whenever a downhill opportunity arose.  It was all very disheartening, from our point of view.

The general area of this rogaine had been extensively mined for gold during the mid 1800s and there were numerous mine diggings and water channels still in existence.  There were also numerous old tracks which weren’t marked on the map; a number being quite helpful to us at times. Unfortunately, in other areas, such as around C68, there were no tracks, and the very difficult head-high scrub proved almost impossible to get through.

Most of the area was ablaze with wildflowers, with brilliant reds, yellows and purples.  As to be expected, there were also the usual prickly natives like the Kangaroo Thorn with its beautiful yellow wattle and nasty sharp thorns, as well as the very unpopular non-native gorse.

As the morning progressed, there was very little discussion between us on which extra controls we could possibly get on the way in to give us a reasonable score, and we kept struggling on a very conservative route which saw us at C34 about 11am.  At this control there was a sudden influx of fellow SA rogainers which lifted our spirits enormously and we enjoyed their company back to the HH.

In total, we travelled approximately 65km and collected 32 of the 70 controls for 1930 points.

Well done to all who competed.  We were in awe of all the winners and place getters –an amazing effort.  Thank you to the organising group and associated volunteers – it was a great event which (apart from the water issue) appeared to be very well run.

One thing which we did miss, however, was the control intention sheet at each checkpoint.  We find that this sheet can be very informative on keeping tabs on and checking progress with other teams during the event.