If you’ve ever rogained, even just once, you’ve most likely faced the problem of explaining the sport to somebody else. It seems that few people outside rogaining have any understanding of it. When attempting to explain rogaining I often ask if people know what orienteering is, and they usually do. If they do, I explain that the two sports are similar (map, compass, etc) but that there are important differences, such as rogaining being a team sport and one that involves longer distances and time. So far, so good. It’s when I get to explaining just how long – up to 24 hours – that things get a bit difficult. The idea that you are out running around the countryside with only a map and compass to guide you for 24 HOURS troubles the comprehension of a lot of people. In my observation people either ‘get it’ and appreciate w 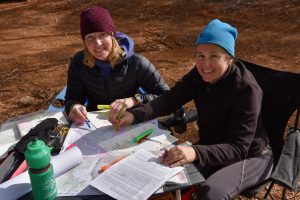 hy you think it’s a good thing to do, or they assess that perhaps you’re a little ‘different’.

Faced with, at best, a nascent understanding of rogaining I rarely muddy the waters by then adding that a 24 hour event is actually more a 27 hour event. That’s because before the 24 hours of traversing the countryside begins there are up to 3 hours of planning with the map. I say ‘up to’ because there are other things to do in that time: making decisions about what gear to take, final packing of backpacks, last minute fuel intake (also known as eating) and etc. It’s also true that many competitors have a casual approach to the whole planning thing and might pick up their maps late(ish) and spend a comparatively short time devising their route(‘Let’s head north!’) For those that want to maximize their rogaine performance though, it’s a case of spending as much time as possible planning.

Whatever the approach it’s fair to say that a rogaine begins with the planning phase. Preparation is, of course, part of any sporting endeavour, but there are few sports where the preparation is so intrinsically part of the competition and few sports where planning is as important. As one of the interstate competitors at the recent Australian championships remarked to me, ‘You can’t win it in the planning, but you can lose it.’ There’s a lot of truth in that. Regardless of how well you are prepared physically, good course selection is critical to a satisfying result.

I’d suggest that a good plan is one where your plan and the execution of your plan have a close resemblance. That means not under or overestimating the distance you can cover while also finding controls. Getting this right is easier said than done and that’s why a good plan includes options to either reduce or extend your route. Or as the famous Roman writer and rogainer from the first century BC, Publilius Syrus, would have it ‘It is a bad plan that admits of no modification’.* 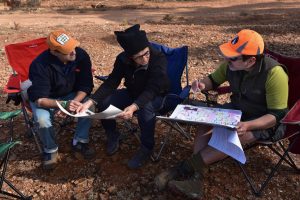 e a giddying number of variables to take into account when planning a route. They include, but aren’t limited to: the nature of the terrain, the weather, the timing of sunset and sunrise, whether the moon will assist at night, how difficult the controls appear to be to locate, your physical ability, your navigational ability and etc, etc.

A rogaine map is a puzzle without a definitive solution with the proof of that statement lying in the differing courses people select. The routes are also selected using different methods. Some people measure distance using pins and string; others use map wheels or other measuring devices. Some teams plan together from the start; others individually devise routes and then synthesize the strategies and details to end up with one final plan.

Once the route is chosen you can get into considering its detail, such matters as what will tell you that you are close to the control and whether there are catching features or ‘handrails’. It’s a large and not easy exercise. If you check out the photos of people planning for the Australian championships, the focus, concentration and nervous energy of the competitors is apparent. And all this to merely get you to the start of an event that many people view as insanely long.

If it’s an insanity that interests you why not test your planning prowess at the SA Rogaining Championships on 24 and 25 July? And if all sounds a bit daunting don’t worry, you won’t be alone, and you will have an adventure you won’t forget.

*Was there rogaining in ancient Rome? The Colosseum would have made an excellent Hash House. 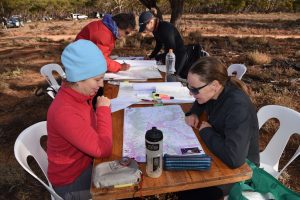