“Nick, do you reckon we’re in the outback yet?” asks my team-mate Jackson.
“Nah, I think you’re meant to know you’re there when you get there,” I reply.

It’s Friday night and we’re cruising up the highway from Adelaide with two Tasmanian rogainers we’d hired a car with, and we’re about to tuck into very traditional Australian food at the Railway Hotel in Peterborough, where you can have your steak ‘surf and turf’ (with prawns on it; don’t worry I hadn’t heard of it either), there is unlimited cauliflower cheese in the bain-marie, and the prices belong in the late 1990s. We make it in our hire-car in to the campsite, pitch tents in Mallee woodland, I discover my sleeping mat blows up like a balloon so can’t be inflated, and we await the morning.

It’s all systems go on Saturday: breakfast, sandwich making, tidying up, map collection, route planning, scouting the landscape from the top of the hill and more, and before we know it it’s 12pm and we’re off on my first 24 hour rogaine. We’d planned a fairly conservative route, allowing us to do most of the mountains in the dark to help navigation, and to get the big distances done before sunset. 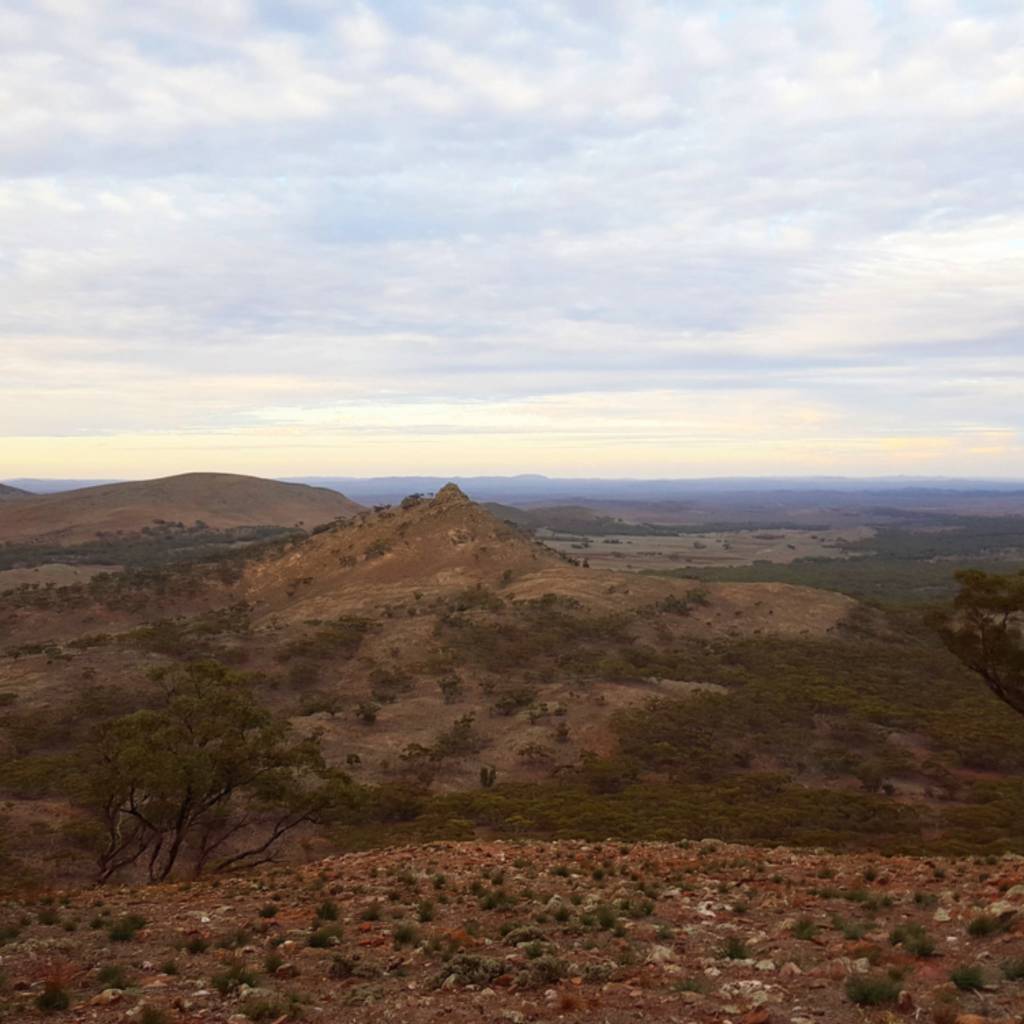 We jogged off from the start, but were soon stopped in our tracks by a tightly strung wire fence, slightly too high to climb over and with barbed wire on the top. This would be the first of dozens of fence crossings, and over the following day we would further refine our method: I’d take my pack off and crabwalk under while Jackson held the wires apart, then I’d do the same for him while he slid on his belly in the dirt. The only other obstacle of note was the occasional waist-high scrub, but that was easy to move through (if a little scratchy) and compared to the dense bush of a Victorian rogaine it was heaven. The gullies, normally choked with scrub, were mostly sandy and gentle, and made for quite a quick way over moving around, provided one was heading downhill rather than up.

By sunset we’d made it out to the far eastern point of the course (point 92), in sight of the almost-ghost-town of Nackara, run across huge and bare field, inadvertently herded about 100 sheep towards a checkpoint (who needs sheep dogs?), and had climbed up to the spectacular rocky ridgetop near The Cone (93), where we saw the eventual winners running down an alarmingly sharp and rocky slope.

It was at High Hill (82), looking north as the rocks and sky turned bright orange, that I said to Jackson, ‘If we weren’t in the outback at the start of the course, we definitely are now!’ We were looking to empty, treeless, dry rocky hills stretching to a distant horizon, and were contemplating the fact that the coast was 1500 to 2500km away, and in between were almost no towns.

The sun set and I got my first taste of night navigation, successfully holding a bearing (to 57 and 72) and picking up a few more controls. After a while, as we followed a ridge line, we decided to turn off our torches and test out the moonlight (at 66), as the clouds were quickly receding from the recently-risen full moon, thanks to the strong and cold wind that was blowing. Sure enough, we discovered that we could not only see the rocks and bushes right in front of us, but the whole landscape was now visible, and for a while we could put away our compasses and just navigate by sight. Even the contours of the map were visible by moonlight! We picked out the ‘lone pine’ of checkpoint 76 from over a kilometre away and simply walked straight to it. In a euphoric mood, we started jogging again, and both agreed that it was the best rogaine we’d ever done.

By midnight my heels were starting to ache, thanks to my too-light and too-hard shoes. We reached the place we planned to be at sunrise just after midnight (43, the ‘ruin’), so had to sit down and work out a new loop we could do with the rest of the night. This took us back out of the outback and into the forest, making for some challenging but satisfying navigation. Following a semantic discussion about whether we were at the ‘head of a small gully’ or in a larger one (84), along with one about whether a gap in a fence constitutes a ‘gate’ (52), we finally were able to stock up on water again (W1), and marched off towards one of the mine shaft areas. We dared to look into one of them but couldn’t see the bottom, so we threw a stone down and counted the seconds until impact. After getting point 94 perfectly, through complex terrain, we had another moment of high spirits just before sunrise, which culminated in sending a Snapchat video of us singing to everyone at home.

Sunrise was extremely beautiful (at 53) but coincided with my fading. I’d never before gone a whole night with no sleep at all, and with aching feet and drooping eyes I was now focusing just on following Jackson around the course. The sun came out, I stopped sweating (a possible early sign of heat stroke?), and worried that if I put sunglasses on I would just fall asleep while walking. The best way for me to move was to do a high tempo but very slow jog, and once we knew we would make it back to the Hash House in time that slowed to a walk. We finally made it in at 11am, at which point I could barely speak, except to say ‘that was so, so hard’, and could barely stand up without swaying. We removed the Garmin watch from the sealed bag to see our distance: 99km with 2600m climbing! We had scored 2600 points, putting us in 4th place overall, and 3rd men’s team.

I crawled into the tent fully clothed and passed out for 45 minutes before waking up to get food and go to the presentations, which were menaced both by raised dust and a few spots of rain. Then it was pack up the tent, dose up on coffee for the drive back to Adelaide, and eat as much as I could to kick-start the recovery process.

My Achilles tendons/heels are still bruised over a week after, I am able to exercise again but not run, but my memories of this rogaine will stay with me long after the bruises have healed. Thanks to everyone at SARA for the great rogaine, from the food at the end, to the beautiful and accurate map, to the stunning checkpoints. Also thanks to Rex and Rosie for letting us compete on your property! We will see some of you in Alice Springs in July, and will hopefully make it back for another SA rogaine before too long!